The Eggleston Family adopted on 11.04.2022. They share this story with family and friends to encourage others to foster. 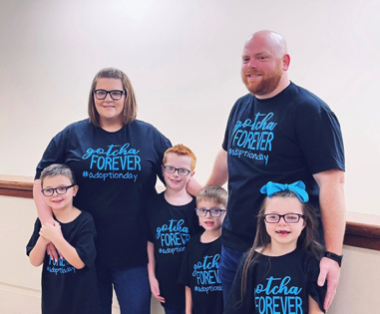 It all started on April 28, 2018, when I heard one of the greatest gospel presentations I had ever heard through the eyes of adoption. This, I believe, was God’s first seed being planted in me on my path to adoption.

Throughout the next year or so, God really worked on our heart for adoption and ultimately led us to feeling led to foster with the hopes of adopting.

If I remember correctly, we had a foster call or two at the beginning of our journey that we decided to say no to. They were beyond our ability or training to handle. Then the moment that changed our lives forever came. On May 11, 2020, we received a call from our workers. There were siblings the same age as our two biological children who needed placement that night. This was one of the scariest nights of my life! We scrambled to make sure we had room for these children. I will never forget the fear and confusion on their faces or the crying that went with it when they arrived at our home. I went outside and tried to help them out of the car by grabbing the hand of the little boy. Once inside, we made our introductions. The kids wouldn’t say much of anything. However, we learned their names. The little 5-year-old boy was John, and the little 3-year-old girl was Charlene. John could talk, but it was hard to understand him. Charlene couldn’t even form words, let alone a full sentence.

Once we got settled down a bit, we wanted to get them in the shower and put on some fresh clothes. They both had hair that reached to middle of their backs, and both looked like they hadn’t bathed in a while. Another heartbreaking detail we noticed right away was a lot of their teeth were rotted to the gum and black in color. We found out later that they wouldn’t eat anything hard or crunchy because it hurt. Here my wife and I were now responsible for two more lives. Responsible for children we just met and had little knowledge about. I don’t know about my wife, but I was scared I wasn’t equipped to handle this. However, through an act of God and the resources provided to us, we made it through and did our best.

As time went on, we went through a lot of trials and experiences. One major obstacle at the beginning was fear. They both had a crippling fear of police. John had a massive fear of windows at night. They both had a fear of leaving the house, as they thought they would never come back. They both had a fear of any new person taking them somewhere (like a teacher pulling them for extra help) because they thought they were being taken away again. Neither child had any background of school nor learning things kids their age should know, both being severely neglected leading to developmental delays.

Now, I’m not saying these things to scare anyone off or to receive any praise for dealing with it. I am simply trying to give a real, honest look at what these kids go through and what foster parents must handle on a daily basis. Here is the biggest point in all of that. IT IS ALL 100% WORTH IT!

During the next two years, we went to several court dates, ended up moving to a new church and community, and eventually the parental rights to both kids relinquished, and were told we could move toward adoption.

During the dramatic waiting period before the adoptions were finalized, we had conversations with our kids about what adoption was. This included telling John and Charlene that we wanted to change their last name to ours, and that they could change their full name if they wanted. We gave them free reign in this decision. We did lay out some options to help their imagination, but the final decision was theirs to make, and we supported it. Charlene had been called Charlee by some of her friends because her name was harder to pronounce for their young diction. She also wanted to have the same middle name as my wife, so her new name was going to be (and now is) Charlee Michelle Eggleston. John ended up landing on extending his name to Johnathan, because that was what a lot of the doctors and therapists called him (his paperwork was wrong and had that as his name). His middle name choice makes me emotional every time I think about the moment, he chose it. He said, “I want to be named after my dad,” and he chose Tyler as his middle name. So, John’s new name was going to be (and now is) Johnathan Tyler Eggleston. Both were so excited to be adopted and asked constantly about when that day would come.

Finally, the day came. November 4, 2022 was our adoption day. It was a day of celebration with friends, family, workers and teachers. All the mess we went through, all the tears cried, all the paperwork filed, all of the appointments attended and everything else in between was worth that moment we got to say, “Yes,” to adoption!

I hope in sharing this, you would consider foster care and/or adoption. We need more people to step up for these kids. Thank you to those who were a part of this journey. We couldn’t have done it alone.